There have been a few of these questions during the last months.
So here is what you can do if you want to use a NoPe switch at the control outputs of an ES-8 or superswich or whatever unit is out there that hav 5V control signals to be programmed.

Also if your control unit does not put out control signals and instead uses a switch its easy as one side of the switch needs +5V from the circuit and the other one then connects to the input of the NoPe.

There is an electronically good and a bad solution (of course the bad one is faster to achieve) but we focus on the "good" one here.

This is what you need to do:

For reference here is where the bits and pieces are located:

Due to the high demand from our customers we are currently working on a ready-to-use module to be used in any pedal either replacing an existing 3PDT switch or for your next new build.

We are currently testing the latest prototype and when feedback is good we will immediately make it available to everyone.

Response was overwhelming, so we decided to give something else a go:

Both are available now here:

When a client approached me to silence his Tonehammer amp I took on the task. Here is the short story what we did.

There are two cheap fans 50x50x10mm used in the stock amp. Although they are not super noisy but due to their size and rpm needed they make an annoying pitched noise.

This is whats in there:

So we took them out and replaced them with some high-end silent fans 60x60x25 and its making no noticeable noise now. To fit the backside fan we had to design and 3D print an adapter which allowed us to use the original holes to mount the much larger new fan.

This is how it looks after the mod:

Feel free to contact us if you wish something similar done to your amp. (Of course warranty will be void after the mod but we send you back the original parts to undo the mod - just in case.)

UPDATE: Due to high demand we have revisited the modification, turned on our 3D printers and came up with an easy to use for everyone solution. Check it out here: https://diy.thcustom.com/shop/aguilar-tonehammer-350-500-700-silent-mod/

This is the story of how this handy tool came into existence.

Most of the builds were running out of the box - soldering finished, guitar to in - amp to out - there was noise!

But occassionaly there were effects that refused to work - even refused to get going after a serious amount of time staring at them or fumbling with the wires, looking at solder joints etc.

And there it is - there is this box. Its usually hidden in a cabinet but from time to time you take it out, look at it - put the piece of your most recent frustration into it - and put it back.

You know this box exists. Sometimes you dream about it. But you rarely open it up and take something out.

You know you are able to fix it. You know it will cost a significant amount of time looking at it and setting up the equipment for testing if you want to dig deeper into it.

So you usually let it go and this box will get filled to the brim with frustration.

I also have this box. Honestly when you are developing new pedals - like I do - this box is not only a box it becomes a cabinet itself.

I made some thoughts what it is that is hindering me to just pick something from time to time and fix it. I quickly came to the conclusion its the testing setup you need (signal generator, oscilloscope, multimeter, power supply, wiring...).

I am well aware that there already are quite a few testing rigs out there you can use. But I wanted something different.

I wanted something that is formed like a pen and that I can point and use like a soldering iron. And it should have the most needed features on board. I did not want any separate parts and pieces cluttering my workspace, just the power supply, the effect in question and the pen.

And I made it. It was a long way to go. There were six! (6) revisions from the initial design. Its my first SMD design and I had a steep learning curve and it took more than EUR 600,- and 9 month for this:

I wanted other people to use it as well, so it had to be cheap but great in design and usability. Here are the features:

Here is the trash pile of all the prototypes I did.

And here you can see all the revisions of the pen that were made through the development process:

You want to know how to use it?

Here is a video I made. Its a little trashy but you will get the point 🙂

Its here. Unbelievable but after 4 years in the drawer with no time to bring it forward finally it is here!

The effect control unit has been reviewed and got a software upgrade (V1.4).

The new software is immediately shipped with newly ordered units. If you already own a unit you can order a newly programmed chip for your unit.

We have been working hard rework the website to bring it to current website standards usable on mobile devices as well as on big screens. Information is more structured available now and - it looks better 🙂

If you find something not working or looking wierd please drop us a note to thc@ thcustom.com. We appreciate your input.

As of Jan 1st 2019 Deutsche Post - along with a lot of other carriers internationally - does not allow to ship goods in letters anymore. A new product has to be used which is a minimum of EUR 3.20 / 3.80 for shipping.

Sorry for this but there is no workaround.

Finally Merlins Glassbower has been given a new PCB without VU-meter - which was making way too much noise when switching the LEDs despite the chip beeing a low noise version.

Its version 1.5 now. If you want to build a boost 27dB without OpAmps check it out here: Merlins Glassblower V1.5 PCB

The ROG Umble board has been verified to be workiing with the SMD JEFT versions. No more searching for the discontinued parts. Check it out here: ROG Umble V1.4 PCB

The long time of silence at least has been interrupted.

Here we are presentiing new stuff:

Read some interesting news about the Modular Looper project.

There is a new 3-band parametric eq for you to build. Its intended as a tone control to be built into an effect. There will be a standalone version as well.

Read some interesting things about graphic and parametric equalizers in the new knowledgebase-article.

Also there is a new DIY report on the same topic Equalizers.

New kid on the block: Merlins Small Time Delay (with tails). This is a nice delay circuit with tails - meaning that even if you switch it off the signal trails out (repeats) and newly played notes dont have the effect.

Huge restock in boards. Lets call it the white flood 🙂 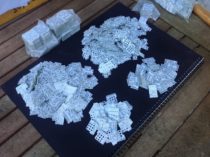 Also there is an update on the modular controller: PControl Modular Part #5

Almost everything in the shop has been restocked!

And here you can see what I've mostly done during the last 3 months:

New stuff: The Optotronics switch and Merlins Glassblower Boost. 27dB in the box.

Big restock came in, so Effect Control and EPIC looper are back together with a lot of other boards.

Check out our clearing discounts. Some boards have huge syvings!

Effect Control V1.2 has been released. Packed with nice features to help you build your multi-effect or a standalone switcher for your pedalboard.

The 5-band EQ has been given an improved layout to have a little more space around the connection pads and some other small improvements. And its red now 🙂