Jon Patton is a great engineer in building guitar effects. He developed a good number of circuits that are well known in the DIY community.

What Jon sais about this circuit: 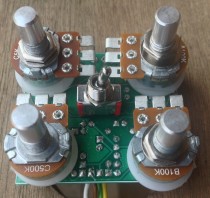 This was a fun challenge, and it came together pretty quickly once we identified what would work well with his amp at home (a Bruno S100, holy crap) and on a big Fender. At home he just wants a “more” button, so I had to make sure there was a flat dirty boost in here somewhere.

I replaced the op amp buffer + inverting drive stage with a MOSFET booster, and replaced the tube stages with with FETs in the normal manner. Note that the design inverts phase, which the original did, too.

I moved the tone controls to put it before the last gain stage because otherwise it was just insanity on the gain levels. It’s already pretty nuts even with all the cuts in front of each stage, but this gives a lot more control over the overall clipping. The tone control and switch are really what make this cool. (Thanks to Cody and Thomas for tossing around some ideas, even if I ultimately went with something different.) Really I’m just repurposing once again the tone control from my Sakura amp, but everything worked out just right for me to get a third mode out of this one and to have a usable bass control.

1) The bass control just shaves off some low frequencies below about 400Hz. It’s is a shelf filter, so the bass isn’t gone, just deemphasized, and at 5:00 the cutoff is at 18Hz.

2) Treble/Tone control: This is based on a version of the Big Muff tone control, with the resistor to ground for the low-pass removed. A lot can be done to radically alter the behavior of the tone control just by varying C9, so that’s what the switch does. R8 is a small resistor (I picked 2.2K) to limit the ultimate range of the tone control so that it doesn’t turn into a full low-pass filter, but it can be omitted for some very very dark settings in the scoop mode. I just don’t like tone controls that bottom out.

a) Mode 1 flipped to one side: Flat treble at ~3:00 on the knob, at 5:00 a VERY tiny boost in the treble above 700Hz, and CCW cuts the treble at that same frequency, like a see-saw. With both tone controls down, it’ll form a mid hump right around the middle of a Fender amp. (If I were to leave off the switch, this is what I would use as the stock mode.)

b) Mode 2 in the center: At ~3:00, the mids are boosted by about 3dB centered ~1KHz (bass and treble are flat). There’s again a slight treble boost at full. CCW, the treble gets cut at 2KHz, so it’s milder than mode 1, for just shaving off the harsher harmonics created by the distortion. This mode was a freebee on the layout by adding one capacitor, so I saw no reason to omit it. It’s not as dramatic as the other modes, but it will usually sound flatter when there’s a lot of distortion present.

c) Mode 3 (flipped the other way) has a mid scoop at ~250Hz for added clarity (this is the “mud” frequency for guitars, so it’s a good frequency to cut). CCW, the treble is cut very deeply, which allows for bass boost with the bass at full and the tone turned down, or a treble boost with the tone up and the bass down. But with the treble and bass at about 9:00, it’s back to a nearly flat response but with the gain cut a lot, for some “mostly clean” boost settings.

Jons original design was built to fit in a 1590a enclosure. My first layout also was designed to fit in a 1590A but I managed to mess this one up by laying out all the pots the wrong way. 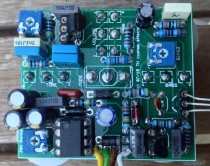 Fortunately I also did a 1590B layout which worked out the first try. I had a lot of fun trying out the prototype.

It’s a very impressive circuit regarding character and tonality. All the people listening to it in my studio wanted to play it on and on.

Here is Jons original sound recording of it: