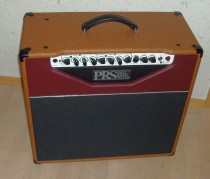 While looking for a new tube amp I came across an offer where the seller managed to spill a can of epoxy across the amp which resulted in this:

However, it was reasonably priced and I gave it a shot. It looked even worse in real light.

First I tested it and found a few other things that need fixing.

But thats for later. Optics first!

So I took it apart and removed the tolex.

Its a very basic made China enclosure out of cheap plywood.

The overall craftmanship is ok but there are typical chinese building processes at work you want to eliminate. First thing to name is the wire to the internal loudspeaker which is not removable as the jack is fixed to the cable which runs through a metal sheet at the back and through a hot-glued hole to the lower compartment of the box where it is soldered to the speaker. This means that the metal piece is dangling at the backside when you remove the amp chassis or while replacing tubes.

The amp chassis is wired very well with panel mounted pots and jacks at the front and the back. the circuit is on well made PCB with board mounted tube sockets. Unfortunately this makes changes to the circuit hard as you need to remove the whole PCB to be able to solder components from the backside.

as usual: THERE IS LETHAL VOLTAGE INSIDE THE TUBE AMP EVEN WHEN THE CORD IS REMOVED. DO NOT TOUCH ANY PARTS IF YOU ARE NOT AN EDUCATED ELECTRICIAN!

lets have a look:

But i will tamper with the sound later.

For now lets start with optics. I ordered new burgundry tolex for some optical highlights.

Ordered some ostrich tolex for the box itself and applied it.

This is how it looks now:

Thats it for the looks.

There are a few things to address:

While I was looking at the chinese soldering craftmanship I found this: 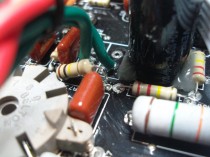 One leg of R73 was not soldered into its hole. Not sure how this can escape a decent quality control but who knows.

So, fixing this got the amp rid of the Crackling/fizzing distortion.

That was an easy one 🙂

I was looking at the two tone stacks that make up the tone controls of the amp.

The first one sits prior to the amplification in the clean channel. With my Les Paul I get too boomy sound and need to reduce the bass to the first quarter. I will try with single coil again to not do anything too much which shuts out other style guitars.

The second one sits after the lead channel. Again, using a LP guitar hits you in the stomach even with bass in the first quarter. Turning the pot furter CCW will do it. I also will try with single coils here again.

I used a tone stack calculator to find different cap values while keeping the existing pots in place and ordered them. Once they get here I will replace the existing parts and give it another try.

After fixing the disconnected resistor:

Playing Tele, Strat and LP guitars through it again makes me think that the above mentioned resistor-fix made the sound jump from abysmal to good 🙂

However, I will still address the too much bass issue and somehow try to make the clean channel more clean but keep the now existing overdrive character.

This is about less gain:

Lowering the gain needs to take part in the channels separately. Unfortunately they share a common tube pentode as input driver, so changing the input tube will affect both channels.

In general I like the sound of the overdriven clean channel but the problem is that if you run pedals in the front of your amp you likely want to stay it clean as long as it goes. So the task was to get the same kind of distortion but at a later volume level of the channel.

To do that I used a EHX 12AT7 tube in the clean position which I swapped in for the existing TungSol 12AX7. I also tried out to bring the distortion further down by making C37 switchable as shown in the pics below. 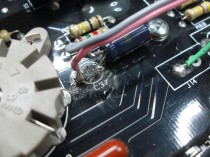 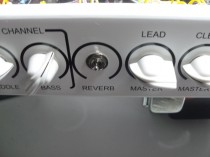 I used the reverb pot hole to temporary mount a switch to the front panel to be able to try it directly while playing. Indeed removing the cap from the circuit gets you another quarter of volume until distortion sets in. In the end I decided to swap the existing 22uF cap for a fixed 10uF cap without the switching option. But if you are after an almost fully clean channel you might consider removing C37 from your amp by desoldering it. Also using a 12AU7 tube can be considered but I didnt like the sound here.

This is how my setup looks now: 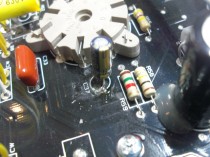 If you are fine with the very heavy distortion you get from the lead channel, leave it as it is. I decided to bring it down a little and swaped two tubes:

The gain is brought down to heavy rock-level at its best. You may still get heavy metal riffs out of it but you will need very hot pickups to do so.

The too much bass-topic again.

After fiddling with the tone stack calculator and some real playing with different cap values I ended up with the following:

The tonestack used here is a Fender-Type stack with mostly standard values. Unfortunately the bass frequency meets the resonance frequency of the box, leading to boomy sounds when playing the lower register. In the end I only altered the bass frequency of the tonestack by lowering it and therefore moving it away from the enclosures resonance. There are now punchy basslines to be played without booming frequencies. 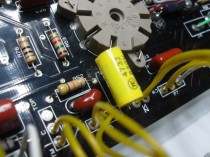 This also removed the boomy resonance and gets you a more defined tone in the lower frequency range. 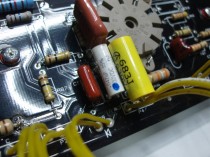 Only thing left to do is installing the new red handle comming and other knobs. Once here I will post the final picture of this project.

A really great amp. My favourite one to play at home. 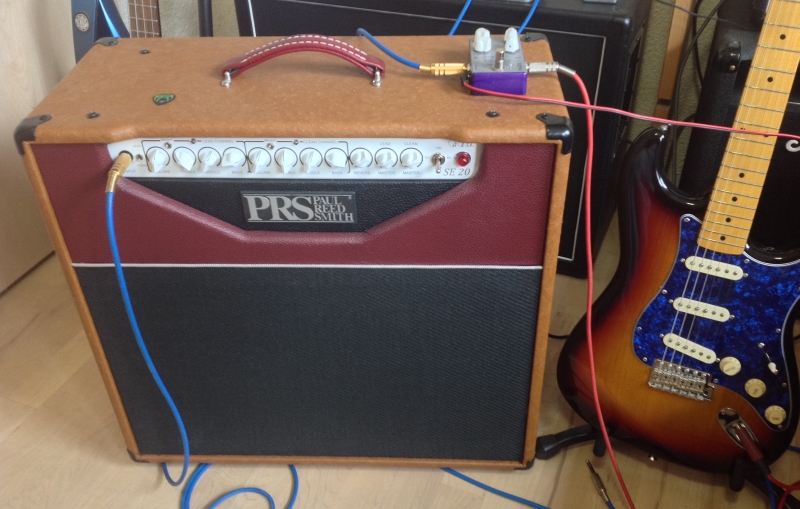 Shipping to EU countries takes 2-5 days, shipping to the US, Canada and other overseas locations currently takes around 1-2 weeks.

Shipping via international letter is without tracking and at your own risk!
If you want to trace it you can add the "registered mail" option to your cart !