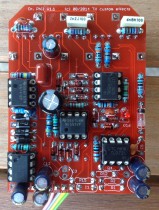 This is a well known circuit which features a versatile compressor together with a nice dirt section.

The optical compressor circuit can be blended in with the original signal. The compressed signal can additionally be blended with its overdriven signal.
Some words about the controls:

There are mixed reactions when people are confronted with so many controls in a compressor circuit. Furthermore these controls are not really what you expect when thinking about a compressor.
Volume: controls the level of the output signal. Works like attenuation. 100% will match the input signal level. (You might want to use 22k or more for R10 to be able to amplify the signal.
Treble: This is a basic treble cut reducing the highs in the overall signal.
Sustain: This is the amount of compression applied to the signal.
Grit: This is a blend control which blends between the compressed clean signal and the compressed distorted signal.
Blend: This blends between the clean uncompressed and the compressed signal (which might have distortion applied by using the Grit control.
What needs to be understood is that using lots of “Sustain” will compress (remove) any “ummph” from the low end. You need to use “Sustain” and “Blend” together to mix your favourite tone!
One of the settings I like most is to use almost full Sustain and mixing only a little clean signal into it. This will raise the level of the higher strings AND provide some clear attack on the lower end.